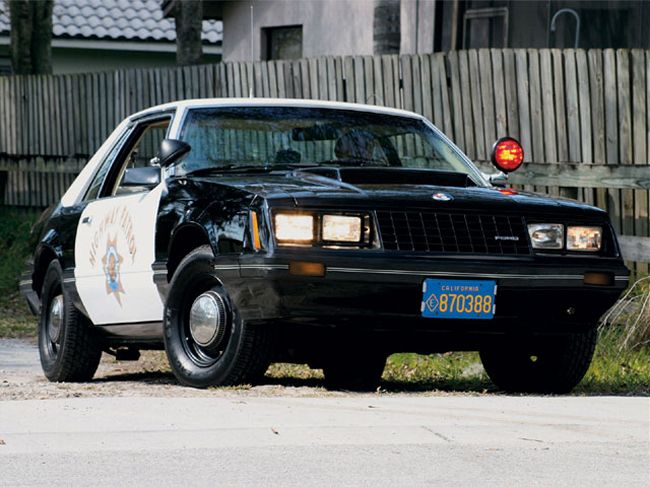 Imagine if you can, driving along California’s Pacific Coast Highway in your new Porsche 911. We’re talking 1982, so you’re cruising along at a pretty good clip knowing that the California Highway Patrol’s big Dodges are no match for your nimble sports car. Then imagine your surprise when your rearview mirror fills with the flashing headlights of an ’82 Mustang painted in the CHP’s all-too-familiar black and white. 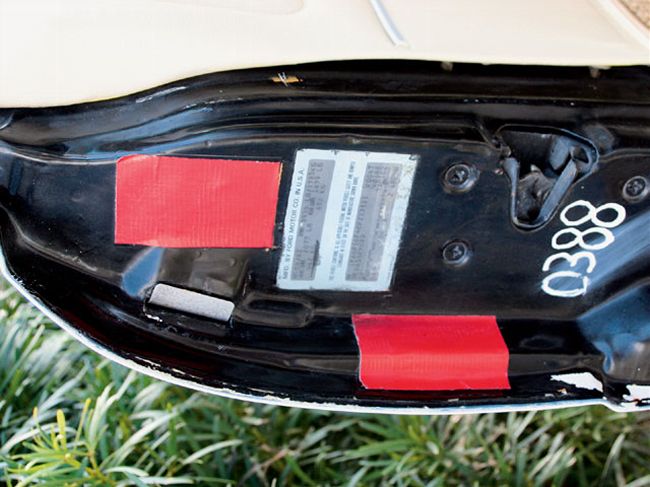 That scenario no doubt played out numerous times in 1982 when the CHP asked Ford to provide H.O. Mustangs to test as high-pursuit replacements for the ’79-’81 Camaros that had been plagued by engine problems. Ford responded with a Severe Service Package (SSP) for the ’82 Mustang and reportedly offered them to the CHP for $6,800 each to seal the deal. Eventually, 406 SSP Mustangs were sold to the CHP in 1982. The program worked so well that Ford continued it, changing the name to Special Service Package for the ’83 Mustang and leading to the sale of over 15,000 SSP Mustang H.O. sedans to over 60 law enforcement offices and other government agencies from 1983 to 1993.

As the Web master for www.sspmustang.org, Mike Riley not only compiles and distributes information on his Web site, he also collects SSP components and owns a trio of cars; an ’83 Florida Highway Patrol Mustang, an ’86 that was used as a Fire Chief vehicle (Nov. ’04 issue), and CHP unit 0388, an ’82 that Mike covets because it comes from the first batch of SSP Mustangs used by CHP. 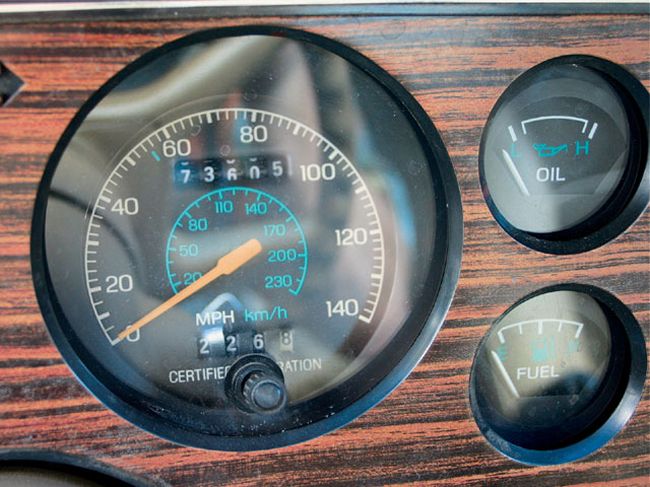 Purchased from a California dealer who specializes in police vehicles, the Mustang was delivered to Mike in relatively good condition for a car that spent three years with the CHP, surviving two additional owners and over 170,000 miles before ending up on the dealer’s sales lot. As a California car, rust was not a problem, but some fresh paint was required, along with the addition of the CHP logos on the doors and an interior makeover thanks to one of the previous owners who spray-bombed much of the interior in bright blue. Mike called it the fruit salad interior because of all the different colors.

While SSP equipment in later years included the familiar, blue silicone hoses, 130-amp alternators, and recalibrated fan clutches, the ’82 SSP Mustang received only a few modifications from Ford to prepare it for the rigors of patrol and pursuit duty. Basically, Mike’s ’82 CHP Mustang is a production H.O. Mustang hardtop equipped with the 157hp, two-barrel, 5.0L H.O.; four-speed transmission; 3.08 gears in a 7.5-inch rear axle; and SSP mods like a calibrated 140-mph speedometer (in a time with production speedos registered to only 85 mph), antistatic grounding straps attached to the hood, and single-key locks for the ignition switch, doors, and decklid. The remote rear-decklid switch was also relocated from the glovebox to the instrument panel on the driver’s side, and radio delete was requested to provide a spot for the CHP’s emergency equipment. Mike points out that Ford also drilled the holes in the roof and quarter-panel to CHP specifications for mounting the radio antennas.

The wheels were standard 14-inch rims with small hubcaps. Mike assumes the tires were high-performance versions, perhaps the General XPs that were used by the CHP in the early ’80s, but that has not been confirmed. 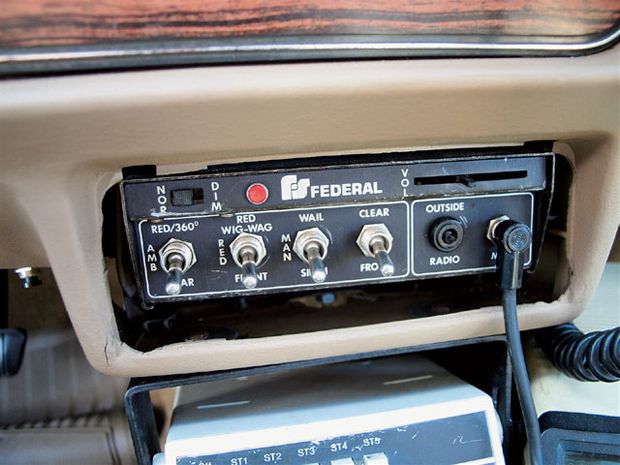 Once the cars were received by the CHP, its own police equipment was installed. In place of the factory radio was a Federal Signal CC-1 controller for the siren, wig-wag headlights, red spotlight on the driver’s side, and rear-facing red and yellow lights mounted on the package tray. A Micro low-band radio and Regency M-100 scanner were also added, along with an electronically operated shotgun rack and reading light on an adjustable gooseneck mount. The siren was mounted behind a cutout in the front bumper, and supplemental front seatbelts were added for officer safety. Finally, red reflective strips were applied to the outer door jambs for night visibility when the doors were open.

Although the CHP removed its equipment prior to selling the car after its service, the California dealership had located the components and installed them prior to Mike purchasing the car.

“That’s another reason I wanted the car,” says Mike, who realized that 24-year-old CHP equipment would be difficult to find from his home in Florida.

Mike’s ’82 SSP Mustang is an important part of the 5.0 Mustang’s performance legend. The car’s selection as a high-pursuit vehicle by the CHP served to confirm its status as a fast and durable performance car while setting the stage for supplying additional SSP Mustangs to state highway patrols, local police departments, and even the FBI.

It was a great car for its era-unless it happened to be in your rearview mirror. 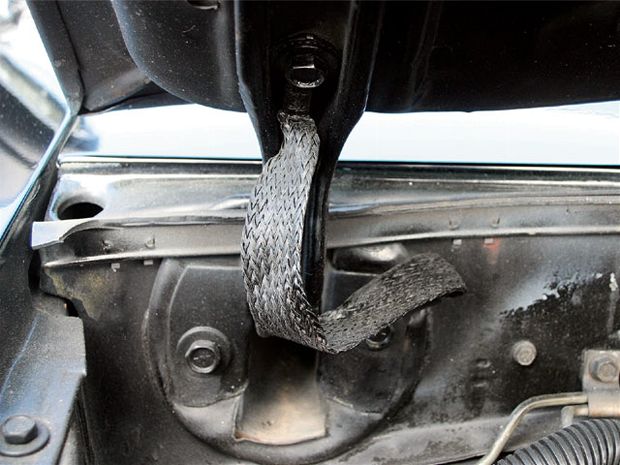 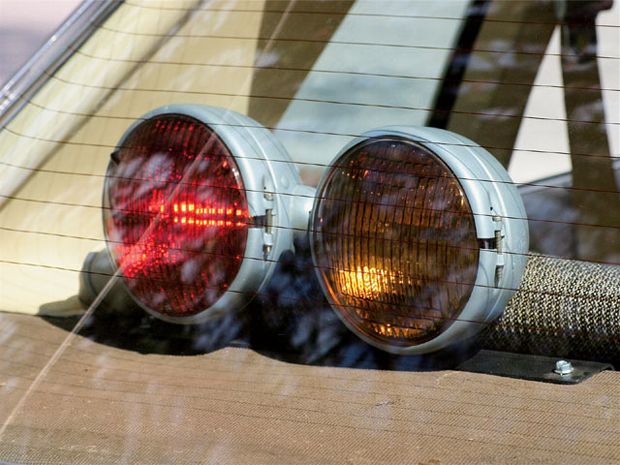 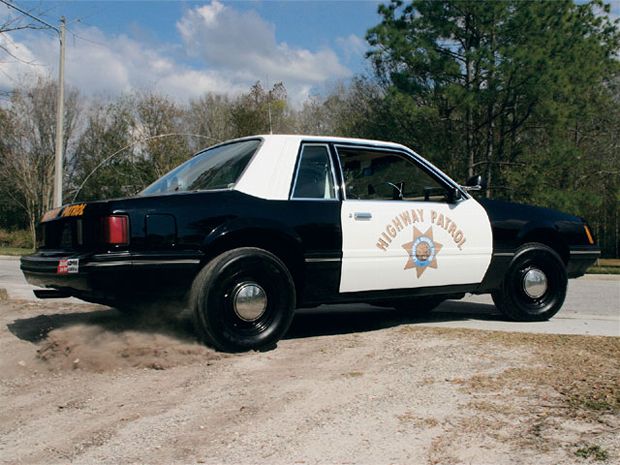 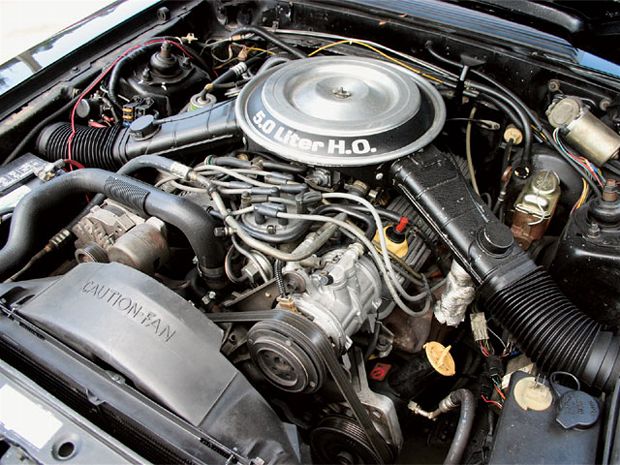 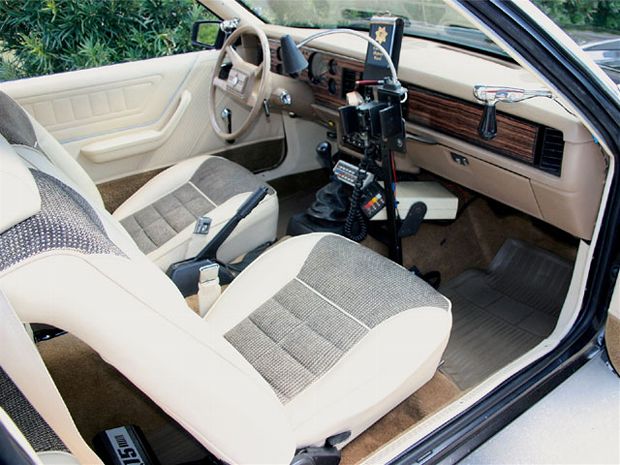