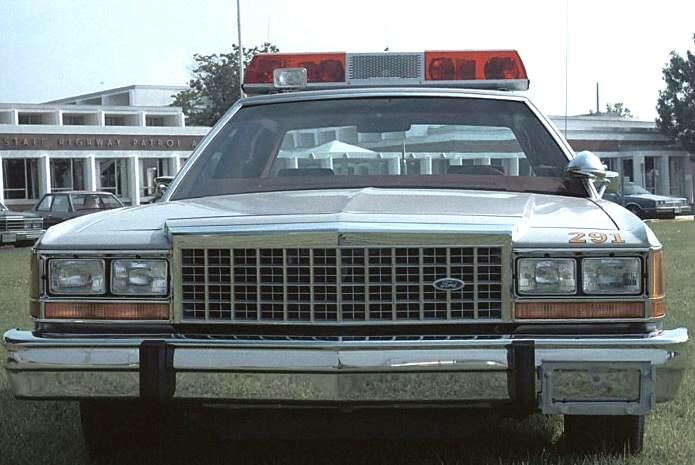 With twelve variations to choose from and data proving greater fuel economy, it is no wonder that more municipalities are coming to YANKEE to solve their lighting problems. 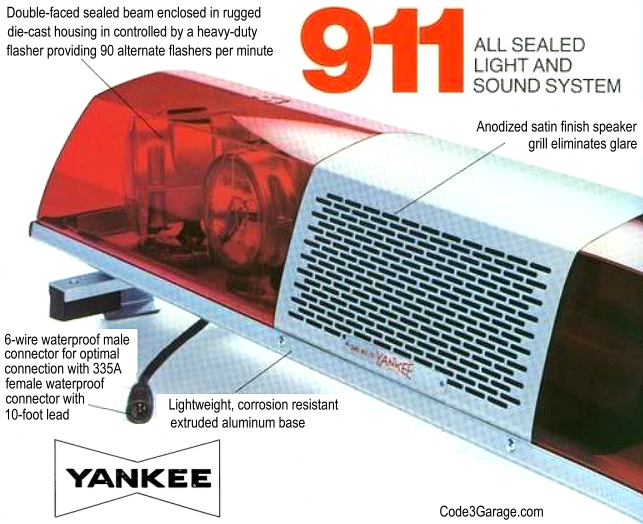 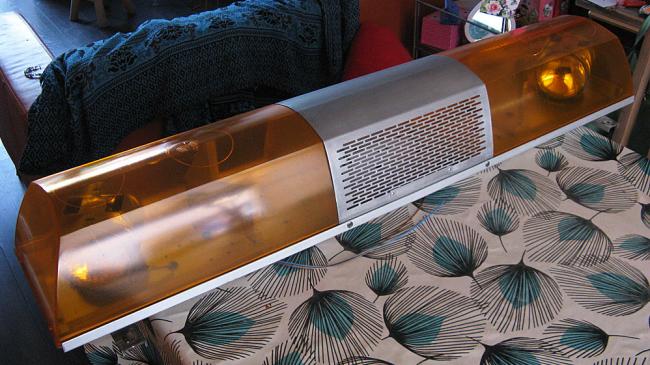 Both inboard and outboard positions are fitted with two Yankee Double Popper Strobe systems for a total of four. Average current draw 7 amps.

A special lightbar designed to meet the requirements of all California law enforcement agencies. Outboard positions are fitted with two sealed-beam rotary lamps, and the inboard drivers side (left) is fitted with a steady burning red lamp facing front and a flashing amber lamp facing the rear. Average current draw 14.5 amps.

This lightbar is similar to the 911-50 except the loudspeaker area has no grill and is open for open speaker installation. Average current draw 10 amps. 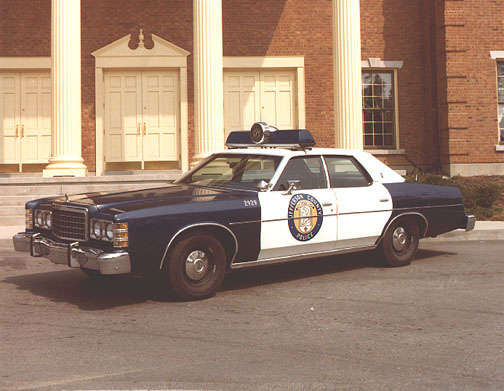 (When ordering for California specify 911-57)

An all-light system consisting of two sealed beam rotary lamps in the outboard position plus two double-faced alternately flashing sealed beam units in the inboard position and two multi-directional reflectors between each rotary and flashing lamp. 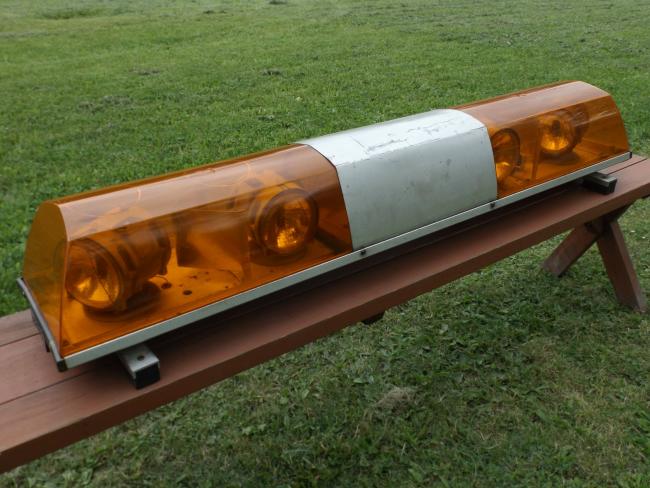 (When ordering for California specify 911-59)

911-SBR-1: Enclosed lightbar with red/red domes and two clear cutouts in the front.

911-SBR-2: Enclosed lightbar with blue/blue domes and two clear cutouts in the front.

911-SBR-3: Enclosed lightbar with red/blue domes and two clear cutouts in the front.

911-SBR-4: Enclosed lightbar with blue/red domes and two clear cutouts in the front.

The 911-SBR lightbars use the Yankee 91/92 fog light chrome housing. 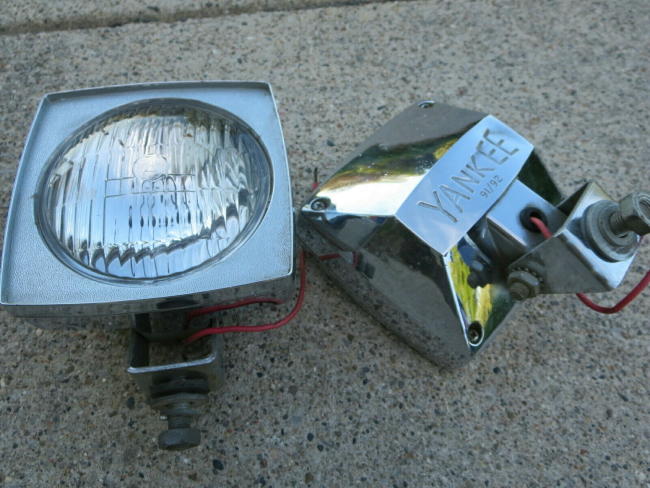 Both inboard and outboard position of this model are fitted with two Yankee double popper strobe systems which each give 50 double flashes per minute – up to a 16 watt second primary flash and a 6-watt second secondary flash. Average current draw 7 amps.

An all light system consisting of two sealed beam rotary lamps (described in 911-31) at the outboard position. Two double-faced seal beams bi-directional flashing lights at the inboard position. Both lights are enclosed in rugged die-cast housing and are controlled by heavy-duty flashers providing 90 alternate flashers per minute. Two multi-directional reflectors between each rotary and flashing lamp. Average current draw. 14.5 amps. Note: When ordering for California specify 911-37. 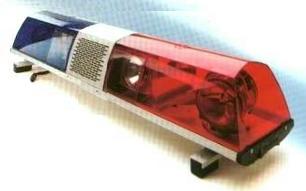 A deluxe system that includes chrome plated rotary assemblies with clear quartz halogen sealed beams. Alternating flashing lights in chrome housings to the rear. Multi-directional reflector positioned between the take-down lights and rotating assemblies for enhanced light output. Clear cutouts to the front for effective use of the take-down lights. Amber cutouts to the rear available for use as warning signals. Quartz halogen sealed beams produce 60,000 c.p. each. Average current draw 24 amps.

Here’s a look at a Yankee lightbar that’s been cleaned up in preparation for restoration. You can get a look here at the rotator. 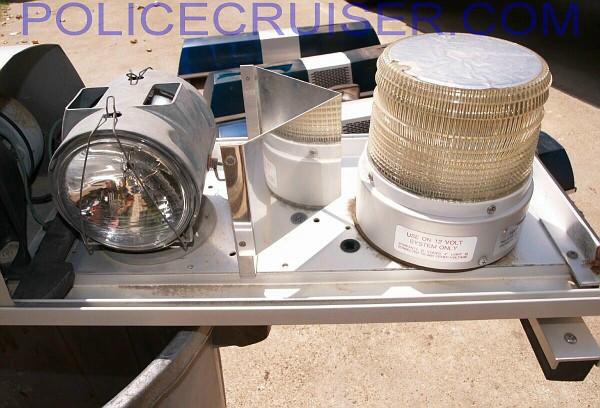 Above is a Yankee lightbar with a double-faced alternately flashing sealed beam unit, a multi-direction reflector, and a strobe. Now imagine that rotator where the strobe is.

This is not an original Yankee lightbar. It’s said that the rotators in the Yankee lightbar were known to go bad, and some agencies converted them to strobe using a strobe conversion kit offered by Lectric Lites . This lightbar was outfitted with two Lectric Lite Astro Flash II (Model LL800- B) strobes. 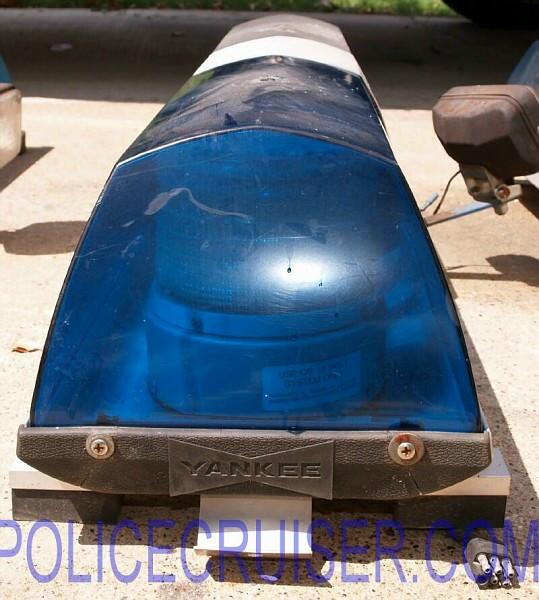 The American Auto Lamp Company was founded in 1915 in New York by Benjamin Putterman for the manufacture of kerosene lamps for automobiles. At some point they began using the name Yankee along with ‘American Auto Lamp Company’ and then simply Yankee Metal Products Corporation. The firm grew rapidly, relocating twice before moving to Norwalk, Connecticut. With the proliferation of the automobile, Yankee was able to continue expanding its product line and production. 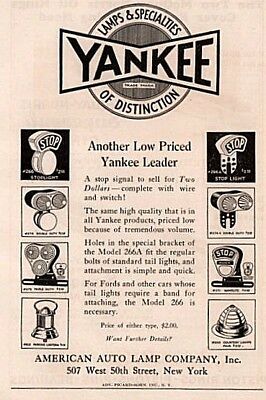 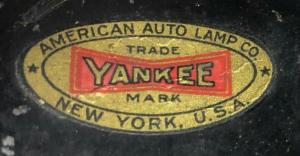 In 1945 the Yankee Metal Products Corporation purchased the Loth building at 25 Grand Street Norwalk Connecticut from the American Hat company. The company constructed two additions on the back of the building, including a plating room, in 1954 and 1958.

When Seymour (Sy) Putterman (son of Benjamin Putterman) entered the family business (Yankee Metal Products Corporation) in 1956, the company was described as “a manufacturer of automotive, bus, and truck accessories in Norwalk”.

Benjamin Putterman died in 1958, and his son Milton Putterman served as President, and his son Harold served as Executive Vice-President. Seymour (Sy) and his brother sold the family business in 1983. When Yankee Metal Products filed a withdrawal on June 14,1985 telling the state that it no longer wished to formally practice business, Seymour’s name and address was listed for the contact. 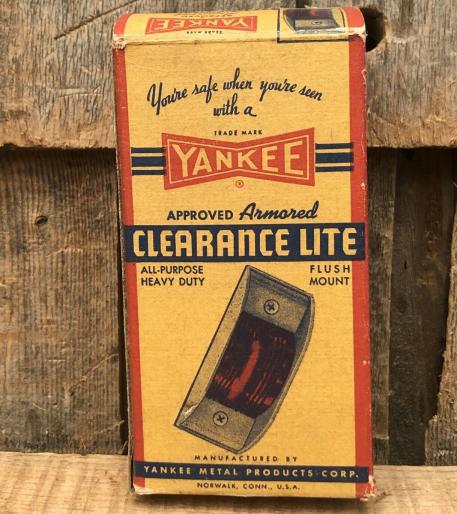 Searching for patents, the earliest use I could find for Yankee Metal Products Corp was in 1927 for a ‘smokers receptacle’. Yankee Metal Products was registered as a corporation on July 20, 1934. It was withdrawn on June 14, 1985. An application to trademark the YANKEE logo (below) was filed on April 7, 1977 and it was registered on December 12, 1978. 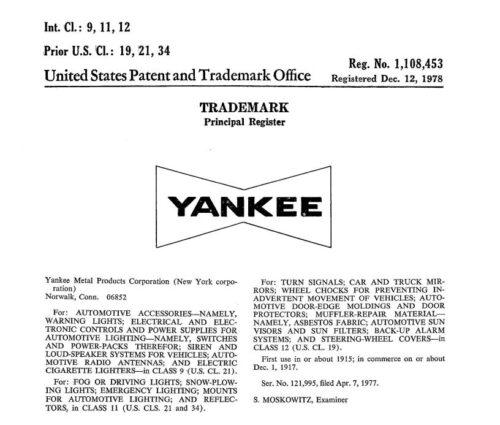 On December 5th 1984, the YANKEE trademark was sold to Latch-Gard INC in Elkhart, Indiana.

On April 10, 1985 Yankee filed an “Affidavit of Use” (“Section 8” Affidavit). An Affidavit of Use under 15 U.S.C. §1058 (“Section 8”) must be filed between the fifth and sixth years of registration. This filing proves that the mark is still being used in commerce. A six-month grace period for filing the Section 8 exists as long as the required fee is paid. The Section 8 affidavit is required in order to maintain the registration. Failure to file the required Section 8 affidavit would result in the automatic cancellation of the registration by the U.S. Patent & Trademark Office.

On November 2, 1989 the financial interest in the trademark was sold to Congress Financial Company by R.E. Dietz Company.

The trademarks last correspondent is listed as:

Yankee’s production of warning equipment is believe to have started in 1971. It is believed that R.E. Dietz bought Yankee in 1977. I have not found any evidence to support this. I do know that a lightbar enthusiast bought a new Dietz 911-56 in 1989 and the lenses had the YMPC (Yankee Metal Products Corporation) molded in to the top of them. So R.E. Dietz was clearly in possession of and using Yankee parts.

If R.E. Dietz did purchase Yankee in 1977, then they were the owner of Yankee when the Yankee 911 came on the market, and Dietz apparently allowed Yankee to continue their own marketing and sales. It could also be that R.E. Dietz just bought a percentage of Yankee and was supplying them with product.

Below is a Yankee 911 lightbar put in use in 1977 by the Ohio State Highway Patrol. So if anything, we know that the Yankee 911 was available in 1977. It has been alleged that R.E. Dietz offered the Model 911 lightbar in 1973, but I haven’t found any proof. If in fact R.E. Dietz purchased Yankee in 1977, then they could have provided Yankee the 911 lightbar to market and sell. I haven’t been able to find any information as to when the Dietz 911 lightbar was first offered, or found any evidence of the Yankee 911 being used prior to 1977. If anyone has any information that shows the Yankee being used prior to that, please contact me. 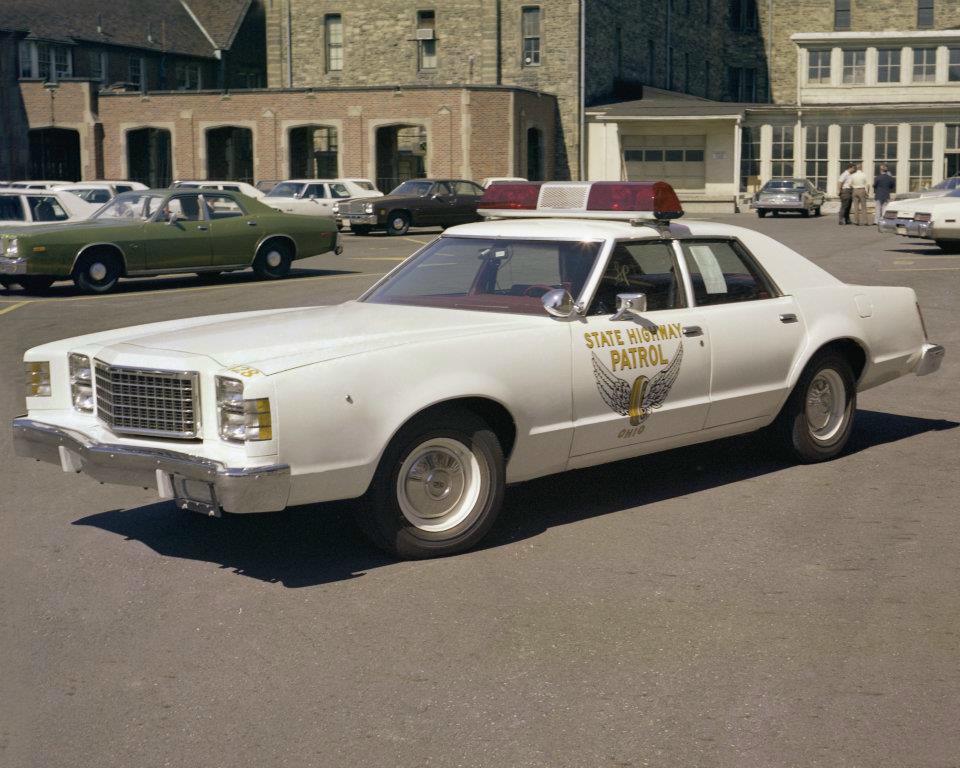 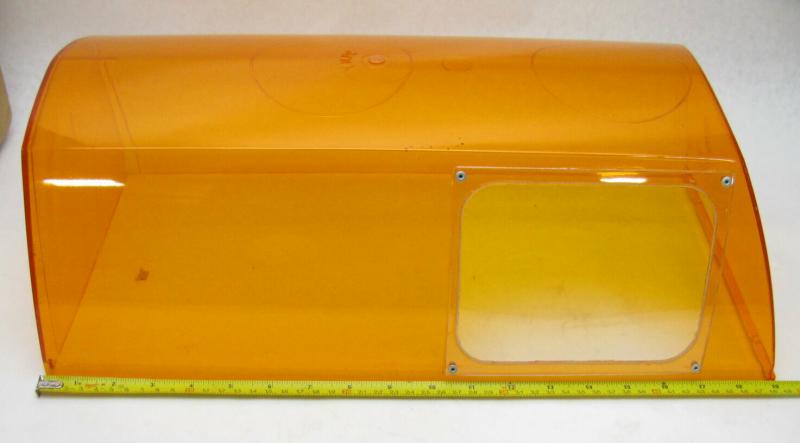 Here is a Dietz 77-61700 amber lens with a clear cutout that has ‘YMPC’ (Yankee Metal Products Corporation) molded in to the top of it. 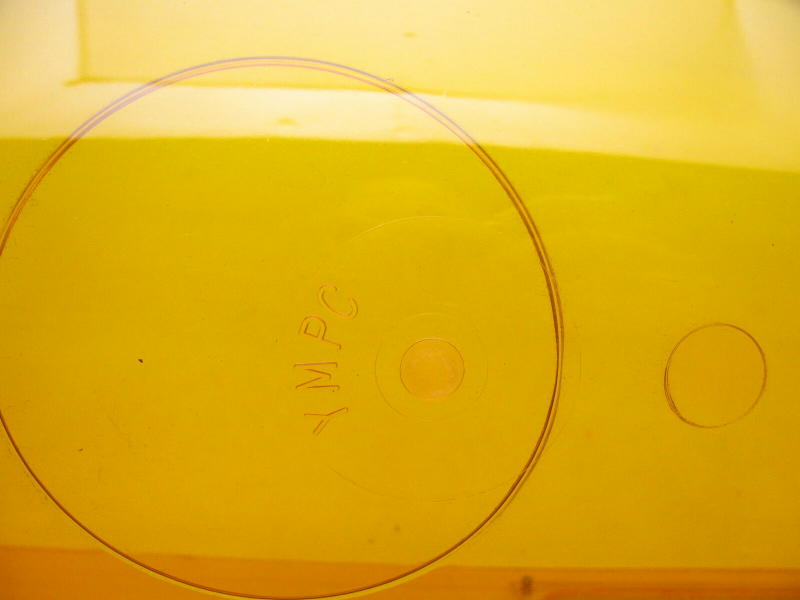 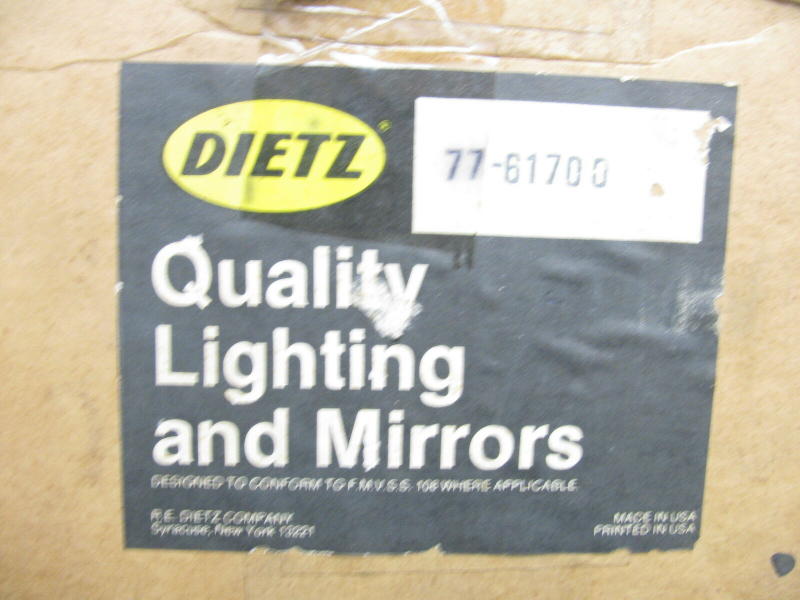 Federal-Mogul bought Dietz in 1990. They had already purchased Signal Stat in 1986. It’s said that when Federal Mogul bought Dietz in 1990 they scrapped most of their own range of equipment and started to sell the Dietz range instead. The Dietz warning lights 7-11 and 7-40 become Signal-Stat 311 and 312. The Signal Stat Dual Comm was allegedly replaced with the Dietz/Yankee 911. I can’t confirm anything in regards to the Signal Stat Dual Comm, or if it shared parts with the Dietz/Yankee 911 after 1990.

NAPA has never been a manufacturer of this lightbar. They were only a distributor.

Yankee was also the owner of the Brite-Vue brand of lighting. They first used the name in 1963, and registered the trademark in 1967. 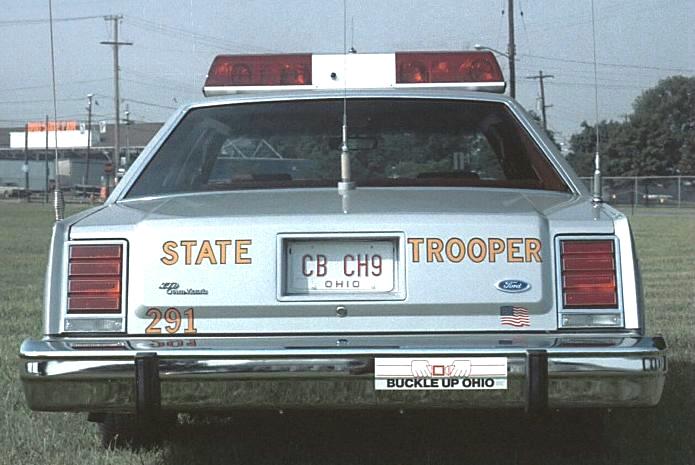 Identifying A Yankee From A Dietz or Signal Stat: 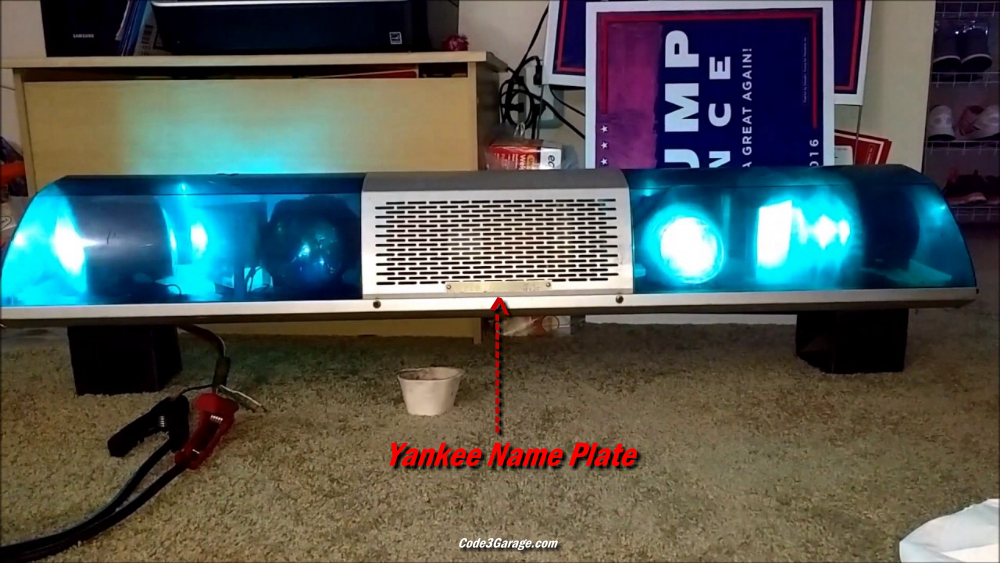 The easiest way is from the end cap with the YANKEE logo. See further up this page. The Yankee and Dietz have identical metal speaker grills, but the Yankee has a Yankee name plate riveted to the front of it. 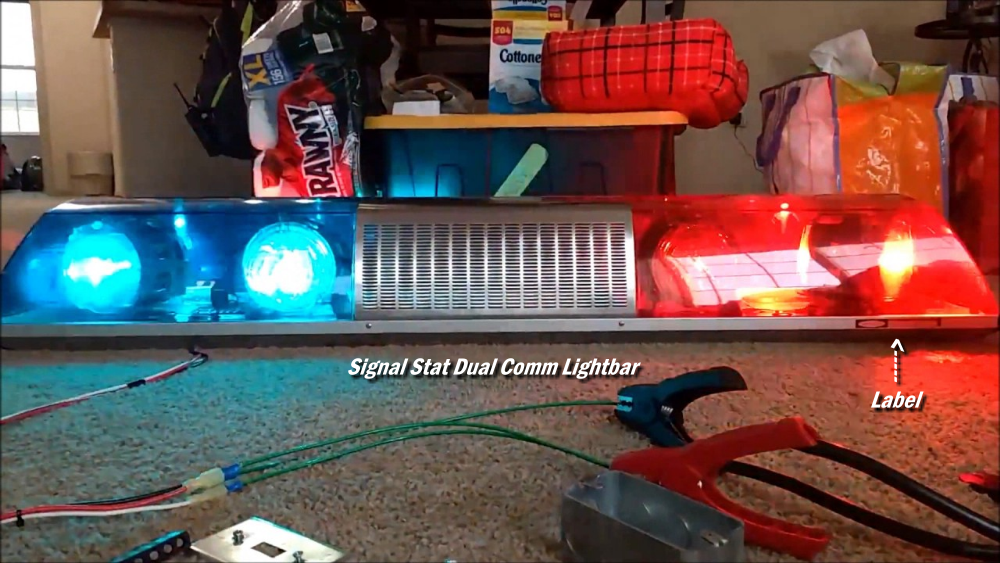 The Signal Stat Dual Comm is very similar in design, but the grill has slots all in a row where the Yankee and Dietz grills have staggered slots. The Dual Comm also has a Signal Stat decal near the right front corner.

I’m looking for Yankee catalogs and advertisements of their emergency warning equipment. Especially anything that can establish dates of use. If you have anything to contribute, please use the red ‘Contact‘ button below. 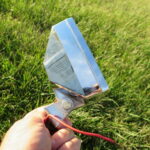 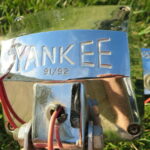 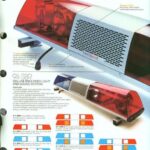 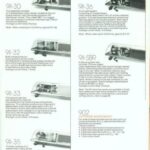 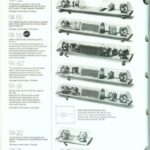 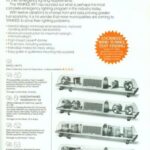 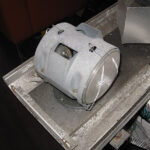 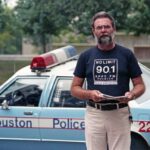